Zoning Board of Appeals

View Most Recent Agendas and Minutes 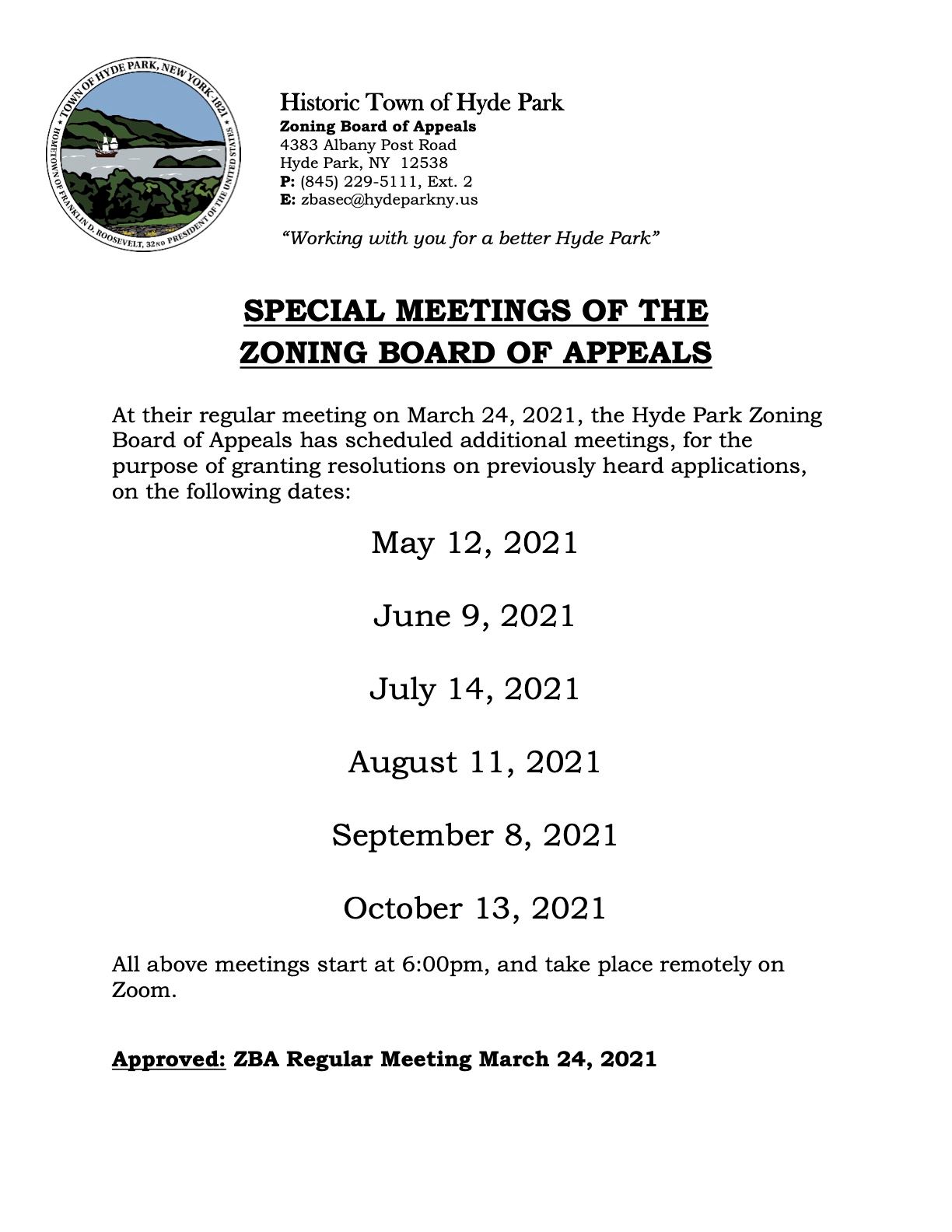 The Zoning Board of Appeals (ZBA) consists of five volunteer members, each of whom serves for a term of five years. The terms are staggered in such a way that a member is appointed each year. The ZBA Chairman is appointed by the Town Board every year at the town’s organization meeting in January.

Comments on individual applications pending before the Board should be made in writing to the Zoning Board of Appeals at the address above or in person during the public hearing. Comments submitted electronically will not be accepted into the record.

All zoning boards of appeals are directly given appellate jurisdiction by State law. Appellate jurisdiction is the power to hear and decide appeals from decisions of the officials charged with the administration and enforcement of the zoning ordinance or local law. The Board also has the power to interpret the zoning ordinance or local law and to grant variances. All meetings of the ZBA require a quorum, which is a majority of the Board of five; all meetings are public meetings, where the public commentary will be considered; all public hearings on specific applications are required to be advertised in the official newspaper at least five days before the public hearing is scheduled.

The Board meets regularly on the fourth Wednesday of each month unless that day is a holiday, the Chair knows that there will not be a quorum (three members present to conduct business), or there is no agenda item to be discussed. On occasion, a special meeting can be called by the Chairman with the approval of the majority of the Board members.

Approval requests for new structures, changes to existing structures, and changes of property uses are submitted to the Town’s Code Enforcement Officer who determines if the requests are compliant with the town code. If they are not, the applicant is so informed and advised that an appeal may be made to the Zoning Board of Appeals for an Area Variance (PDF) or a Use Variance (PDF). (See Zoning Board of Appeals Relief for more information.)

After vetting by the Town’s Code Enforcement Officer, new applications must be published in the town’s designated newspaper at least five days prior to the scheduled ZBA meeting where the applicant or his representatives present the request for a variance. Oral comments from the public will also be accepted during the public hearing periods of the ZBA meetings. Written comments on pending applications may be submitted and must be received during the period that an application’s public hearing is open.

After the public hearing has been closed, the ZBA will produce a formal resolution guided by the state criteria for acceptance or rejection of the variance request.